Following the catastrophic fallout from the doomed Derry City Hotel meeting, the impact of the disaster has far-reached consequences for communities already divided and distrustful of each other. You cannot help but be drawn in and empathise with the civilians caught up in a raging and unrelentless war they want no part of.

The guerrilla war in the province has gained momentum as it extends to mainland Britain and the Irish Republic. Darkness takes us from the dank hellhole of the overpopulated Victorian Armagh Women’s Gaol to London’s lavish, opulent private clubs.

An unmerciful and harrowing tale, it endeavours to illustrate what life was like for Ulster’s war-torn, sectarian communities. It captures a story of conflict, survival of the fittest, and victims who attempt to live and love against a background of chaos and carnage.

Hope is deemed lost and forgotten until the power of love, truth, and justice steps in to create Light and a new beginning. 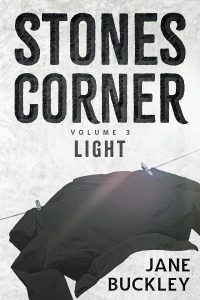 ABOUT JANE                      Jane Buckley was born in Derry/ Londonderry, Northern Ireland, in the late 60s and is the author of the Stones Corner Volume 1, Turmoil and Volume 2, Darkness.  Jane is currently working on Volume 3, Light due for release in September 2022.  The final in the tretalogy Volume 4, Hope will be available in late Spring 2023. Like many of her generation, she had to leave to find work elsewhere. At the naïve age of 17, she moved to London, where she lived and worked for over twenty-five years before moving to Nice, France. Along with her husband John (born in Cork, Ireland), they finally returned home in 2017 and lived in Donegal. They love it but have forgotten how unpredictable the weather is! Since Jane lived predominantly in London throughout the awful time known as "The Troubles", it was apparent – and still is today – not all the facts of the horrific events in Ulster – perpetrated on both sides of the warring factions – were presented in an accurate and unbiased way. This bias was especially true in mainland Britain. Over recent years, the couple recognised that many of the people they'd been fortunate enough to meet on their travels worldwide didn't understand why or how the conflict here in the North of Ireland began and why it continued for three decades. Jane found this particularly frustrating and decided to take it upon herself to inform them and others by writing a historical fiction series based on her own childhood experiences and around events from this horrific period in Ireland's history. She says writing was a frightening project at first, given she'd never written anything substantial before but, being Jane, she'd write not just one novel, but a tetralogy, hence Turmoil, Darkness, (Light and Hope!).  Jane believes that we need to move on from "The Troubles" as a country while never forgetting how and why they occurred. In recognition of the hardship and suffering endured by so many of our friends, family, and neighbours, we should continue to embrace the healing and reconciliation process.

There are no reviews yet.

This website uses cookies to improve your experience while you navigate through the website. Out of these, the cookies that are categorized as necessary are stored on your browser as they are essential for the working of basic functionalities of the website. We also use third-party cookies that help us analyze and understand how you use this website. These cookies will be stored in your browser only with your consent. You also have the option to opt-out of these cookies. But opting out of some of these cookies may affect your browsing experience.
Necessary Always Enabled
Necessary cookies are absolutely essential for the website to function properly. These cookies ensure basic functionalities and security features of the website, anonymously.
Functional
Functional cookies help to perform certain functionalities like sharing the content of the website on social media platforms, collect feedbacks, and other third-party features.
Performance
Performance cookies are used to understand and analyze the key performance indexes of the website which helps in delivering a better user experience for the visitors.
Analytics
Analytical cookies are used to understand how visitors interact with the website. These cookies help provide information on metrics the number of visitors, bounce rate, traffic source, etc.
Advertisement
Advertisement cookies are used to provide visitors with relevant ads and marketing campaigns. These cookies track visitors across websites and collect information to provide customized ads.
Others
Other uncategorized cookies are those that are being analyzed and have not been classified into a category as yet.
SAVE & ACCEPT
Powered by