What Rollo Did Next…

“What Rollo Did Next…” is a story about acceptance, prejudice, friendship, loneliness and inclusiveness. It is aimed at 0-5 year olds and contains valuable lessons, contributing towards introducing good values during the critical early years of a child’s development.

The story tells a tale about a young bear cub named Rollo, who goes on holiday with his family to ‘Bearland’. Whilst initially feeling sad & lonely without his friends, things quickly change when Rollo receives an invite to play from an unlikely source. Despite Rollo negatively prejudging another bear, he was very grateful when that same bear included him in games with the rest of the bears. From there, friendships are formed. When Rollo returns home, he is faced with a similar scenario, except ‘the shoe is on the other paw’. drawing from his experiences in Bearland, how will Rollo react?

This book highlights the importance of people being inclusive and accepting of others whom they may consider ‘different’ to them, whether it be in relation to cultures, creeds, religions, sexuality, ways of life etc. Rather than treating people with suspicion or fear, and perhaps unfairly prejudging people, this book encourages the reader to embrace differences and diversity.

‘What Rollo Did Next…’ attempts to deliver this message in a very simplistic, child friendly way via a children’s picture book format. Whilst the story is based on the author’s personal experience, it is told in a way that is both honest to the overall message but also engaging to younger readers. I have also worked hard to ensure that the illustrations compliment the story being told and are visually appealing to children and adults alike. 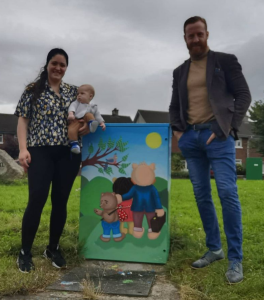 (My wife, son & I beside an electricity box that I was commissioned to paint with a page from 'What Rollo Did Next...'

About the Author: My name is Ciaran J. Curley. I am a Children's Author & Illustrator based in Dublin, Ireland. I am proud Father of one and a husband. Outside of Family life, I have many interests such as playing the banjo, Irish literature & history and training, however, my true passion lies within Children's literature & illustrations. Whilst I have always had a passion for art & story telling, ever since becoming a Father in 2020, this has magnified hugely. I love an engaging Children's story that ignites imaginations, delivers a message and has fun, colourful illustrations. I base my stories on real life events, however, I attempt to deliver the message in a simplistic, child friendly way via a children’s picture book format. I try to tell a story in a way that is both honest to the overall message but also engaging to younger readers. I have also worked hard to ensure that the illustrations compliment the story being told and are visually appealing to children and adults alike. I hope you enjoy my work and I am very happy to receive feedback. Thank you.   Inspirations include:

5 reviews for What Rollo Did Next…

CHLOE CLOUD AND THE FRIENDLY FOG

RILEY RAINBOW AND THE COLOUR CATASTROPHE

Adams Cloud- Before you Sleep

Sold by Buy the Book

Kong and the Hungry Crocodile

What Rollo Did Next…

This website uses cookies to improve your experience while you navigate through the website. Out of these, the cookies that are categorized as necessary are stored on your browser as they are essential for the working of basic functionalities of the website. We also use third-party cookies that help us analyze and understand how you use this website. These cookies will be stored in your browser only with your consent. You also have the option to opt-out of these cookies. But opting out of some of these cookies may affect your browsing experience.
Necessary Always Enabled
Necessary cookies are absolutely essential for the website to function properly. These cookies ensure basic functionalities and security features of the website, anonymously.
Functional
Functional cookies help to perform certain functionalities like sharing the content of the website on social media platforms, collect feedbacks, and other third-party features.
Performance
Performance cookies are used to understand and analyze the key performance indexes of the website which helps in delivering a better user experience for the visitors.
Analytics
Analytical cookies are used to understand how visitors interact with the website. These cookies help provide information on metrics the number of visitors, bounce rate, traffic source, etc.
Advertisement
Advertisement cookies are used to provide visitors with relevant ads and marketing campaigns. These cookies track visitors across websites and collect information to provide customized ads.
Others
Other uncategorized cookies are those that are being analyzed and have not been classified into a category as yet.
SAVE & ACCEPT
Powered by